Home/Sports Pain Treatments, Stories from the clinic/How trigger points and bad technique can mess up your knees and running [CASE STUDY]
Previous Next

I was working with a competitive runner who was told he had weak knees and his next stop was surgery. He hadn’t been unable to run for the last two years without getting pain on the inside of his knee (diagnosed as Patella Tendonitis). This would kick in after running for only a mile or so.

Two years of no running 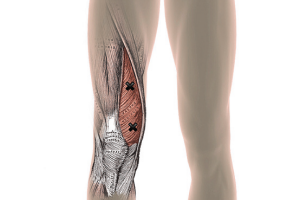 Insanity: doing the same thing over and over again and expecting different results.

He’s spent two years looking for a fix in Ireland from the usual suspects (who cost an arm and a leg…or should that be knee!) and hitting dead ends! Two years of no running…utter madness!! He spent thousands of euros on physiotherapy sessions, consultants, MRI’s and even got some expensive saline injections into the knee in a well known Dublin sports clinic and the next stop was to go under the knife. I find injured runners will literally run to a surgeon but are very sheepish to see and understand what they are doing wrong in their running themselves.

He had a chance conversation with a colleague who had been through the ChampionsEverywhere technique coaching system and recommended us (good on you for spreading the word!). So he travelled up from the other end of the country to get help for his so called “weak knees”.

You don’t have weak knees!

So how do you fix the problem? I used Neuromuscular Therapy to clean out all the trigger points (knots) in the quads which are responsible for his persistent pain in the knee which we could replicate.

During the session I could categorically shout: “You don’t have weak knees!”

Once he saw what he was doing incorrectly with his running technique he understood that he didn’t have ‘weak knees‘ or a ‘dodgy knee‘ and he understood exactly what his problem was:

He got homework and a roadmap of gradual training to get him back on his feet. He was back running pain free for the first time in two years.

Magic? Not at all! I just broke the pain cycle, caused by tight muscles, and taught him how to use his knees properly when running…simples! Please don’t spend two years of stop/go running and ineffective therapy before you seek help. And please, for the love of god, stay away from the surgeon’s knife!