I had a very active client into the clinic last week presenting with hip pain. She loves her golf, gym, walking and even a bit of jogging now and again, she’s quite inspirational really. Her hip pain started like a lot of peoples muscle problems, with a slight ‘niggle’. She thought exercising the pain away would help and a long brisk walk in the park ended in a hobble. She was very concerned and a bit upset, it was her first injury to put her out of action in her 75 years!

All the panicky thoughts came into her mind during a three week spell, “Do I need a hip replacement? Did I break something? Do I have arthritis? Will I be able to be active again?” etc. So she booked in with her Doctor and was referred for an MRI on her hips. In the meantime she was seeking some hip pain relief with me in the clinic.

A quick exam showed her glute medius muscle (located high in the bum cheek, just below the pelvis) was very tender to palpate. It has a job of being one of the key leg stabilisers as well as helps to move the hip joint around.  We could replicate the hip pain exactly as she felt it when walking. I explained how problems usually happen there in the hip and she thinks she remembers initially tweaking it while in the park walking. I explained that sometimes these things happen and I wasn’t very concerned it was anything too serious. 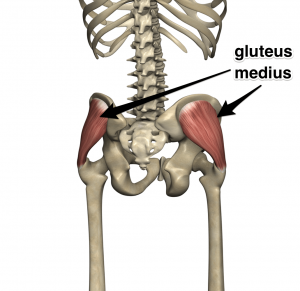 Communication is very important when working with clients, especially women as they really do put on a brave face in the clinic. Men will let me know straight away if they are in discomfort but women rarely do. I aim for a 6 out of 10 or below (discomfort wise) when doing soft tissue work and I ask the clients to make sure to let me know if we ever go above that as they will begin to tense up their muscles.

However, on several occasions I wasn’t receiving feedback until I noticed a bit of a reaction on her face. “You’re also an expert face reader!” she quipped. When I asked her what the discomfort levels were while I worked she said it was about an 8 out of 10. Whoa! Stop right there! This type of pressure does no client any good, especially with an older client who is at risk of bruising and can sometimes be more delicate in general.

Why didn’t she let me know? She said wanted to “get the problem fixed” so thought she would just bear the discomfort.

I stopped the session and had another conversation on what we were trying to achieve together and why it was important to not be a hero on the plinth before we carried on. That day she got some pain relief but there was still more work to do and we would wait for her MRI result later in the week before doing more work, more for her own peace of mind.

Reading her MRI result it turned up negative for everything except some ‘mild gluteus medius insertional tendinopathy‘, pretty much as I suspected. Her doctor said not to worry about anything and prescribed some painkillers and anti-inflammatories and told her to rest. So back in the clinic and she was way more happy with the treatment plan I had in mind knowing there was no serious injury present. We did some great work using trigger point treatment and myofascial release of the glute medius and other surrounding muscles. We had no more communication issues and she left a lot more spritely than she came in. High five! Over the following few days she was back walking normally again. Still a small bit of work to do to get her back jogging mind you!