I had a good outing last Sunday but there was more to give in Dublin Masters Cross Country Race. It was the first race of 2018 and my fitness is just as high if not higher before the week long break from structured training over the Christmas. When I say ‘break’ I don’t mean a total break because I obviously like spending my time running and it allowed me to do some fun stuff like the annual Winter Solstice Sunrise Run up in the Dublin Mountains as well as some easy morning trots around the block with Ann to keep the body loose. 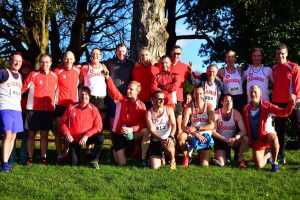 I had planned to go out for a run on Christmas day but the weather was just so bad in Carlow I said forget that more vino please! I did however get down to Dungarvan in Waterford for 5 days of hiking, biking, running and sea swimming with a great group of friends. I only really did one quality session in the form of an Out & Back (1hr @ 1/2  marathon effort, 30min one way and back slightly faster) along the Waterford Greenway and I was flying. It’s probably the first time that I actually managed to get back just a few seconds before time was up, my pacing is usually 15-20 seconds off. The rest of the few weeks was easy running and some strides for leg speed.

I seem to bounce back very strong after a break in training and it was the same after the long summer of racing in the mountains in 2017. 10 days of hiking in Poland and Slovakia was the break from training and about three weeks later, when the heaviness from hiking went from the legs, I went up a new fitness level (VDOT). That VDOT progression would continue every second week until December! It’s one of the first times I’ve entered the  Cross Country season with loads of time to prepare and in quite good shape.

So it was my first time doing the Dublin Masters 6km (O35 category) and I wasn’t sure what to expect, even more uncertain as I was celebrating my birthday the night before, not great preparation! The course in St. Anne’s park, Raheny, was dry, flat and fast for the most part and I had to change my spikes from 15mm to 12mm in a rush beforehand. I was at the front of the start line but went out quite conservatively. At the start of the second of four laps I found myself in the company of some good runners who I’m not used to being around in XC, Paul Flemming, Ronan Kearns, Brian Furey from Rathfarnham, Peter O’Toole (Crusaders), Niall Lynch, Fergal Whitty (Donore), Michael McCarthy (Liffey Valley). I think this kind of alarmed me a bit even though I was feeling very comfortable with the pace.

Club mate Ciaran Diviney was the next group ahead of me but it might have been a stretch to try and catch him half way through the race and there would be a risk of possibly blowing up. Looking back I should have went out harder and worked with Ciaran. The 4th and especially the 5th kilometers were very pedestrian (3:40, 3:49) and I could feel like it was nearly easy running, the group seemed to be quite cagey and everyone wanted to tuck in. I wanted to push on but I would have been running by myself into a headwind then and unlikely to catch the next group. At least with the group I could react as the final laps developed and in XC it’s about racing those around you not so much time. With 700m to go I took the lead through the narrow forrest section and started to crank up the pace. Second last corner David Power (Rathfarnham), who had progressed excellently through the field on the 5th Km (with a 3:30min/km Vs. our 3:49min/km vs), overtook me on the second last corner.

I thought it would be a repeat of the National Novice where he did the same on the last lap but I managed to claw him back in the Sprint finish. I only lost one spot to Paul who made a surprise 200m dash at the last corner, he did similar to me in a BHAA race in November. As a club mate said about him: “Mr Fleming is the old dog… and his old tricks are still good!”

Finishing 13th in a field of 280 masters athletes, I felt there was still more in the tank so that’s a good sign for next week’s Leinster Intermediate & Masters in Dunboyne, Co Meath.

Birthday celebrations continued after the race and well into the evening! It was a great day all in all.